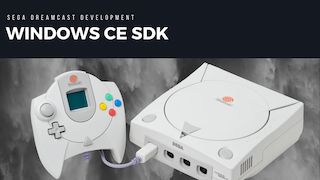 Originally called the Dragon SDK and planned to be the full Operating System (OS) of the dreamcast. However SEGA decided to go with their own limited BIOS with the Dreamcast instead of a fully functional OS. So to use WindowsCE on the Dreamcast game developers would have to bundle the entire Windows CE OS on the game disc 1.

This means that in order to run the game the dreamcast would first boot into the file 0WINCEOS.BIN on the GD-ROM disc and then it would load the game. This had a performance impact, reducing the resources the developers would have for the game, so lower memory, longer loading times and less performance for the actual game.

So why would developers use the Windows CE SDK instead of the more powerful Katana SDK?

The answer mainly comes down to the ease of porting PC games to the platform and the developers can use their prior windows knowledge instead of learning a completely new platform from scratch 2.

This reduces development cost as much of the code from the PC version could be used with some modification and it would take less developer time to learn the Application programming Interfaces (API). So it was a trade-off that worked for less performance demanding games as they could be developed much quicker from a PC port 2.

One example of a studio doing just that is a presentation from D. Michael Traub from Acclaim on porting the Quagmire engine to the Dreamcast, they used the WinCE SDK to port to the dreamcast and they found that it worked very well, claiming that it only took a month to port the engine thanks to the SDK.

Porting issues from PC to DC

Even although the Windows CE SDK’s main focus is to make it easy to port your game from Standard windows Direct X over to embedded platforms such as the Dreamcast, there were a few important compatibility issues that developers needed to take into account when porting their games.

Windows CE is Unicode only, so the game needs to be changed from ASCII.

Unlike the standard Katana SDK the game executables for dreamcast windows CE were actually in PE executable format. The game executable could be called anything with a .EXE extension but many games simply call it GAME.EXE which may have been the default.

These executable files are able to be opened in IDA Pro and radare2 for reverse engineering but most don’t contain any debug symbols.

For games with debug symbols check out this post.

The Windows CE SDK for dreamcast came with a tools folder which contains a few GUI-based programs for developers to help debug and optimise their games.

The dreamcast Tool is a useful program to connect from a PC to a dreamcast development system allowing you to do tasks such as boot an executable image, run Dtrace, show textures etc.

DreamcastTrace or DTrace is a performance monitoring tool to allow developers to optimise their games to be as efficient as possible. It is unrelated to the well-known standard DTrace tool by Sun Microsystems. 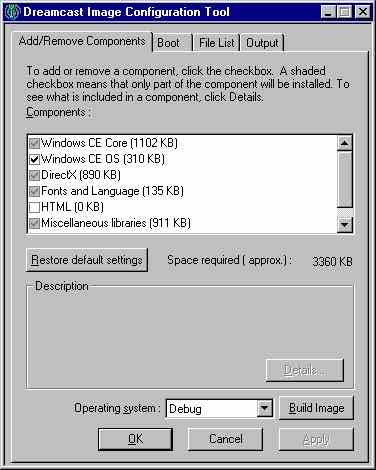 Unlike its name it does not relate to graphic images, instead it refers to Operating system images. This allows you to configure which modules will be included in your games version of the Windows CE Operating system.

This is a tool for creating the boot loader for the disc (IP) called ip_drago.bin since the codename for the Win CE SDK is dragon.

You give it the name of your main game executable (*.exe) and it will run that on playing the GD-ROM disc in a dreamcast.

The profiler is a tool to debug performance issues in your game executable’s functions. This tool is vital to make a playable dreamcast game that also pushes the hardware limits without going below 30fps.

The Synthesizer Author Tool is a program for sounds engineers to create a collection of instruments for use in the game music.

This is a standard source-level debugger supporting breakpoint and variable value watching.

Also the file NknoDbg.exe is on the retail disc of a few retail games such as Sega Rally 2. But it is unconfirmed what this executable is and how it differs from the standard Windbg.exe tool.

The Utilities differ from the tools as they all tend to be Command Line oriented and would normally be scripted and used as part of a automated build process.

The following are tools used by sound engineers to convert between sound formats for use on the Dreamcast.

What is the difference between this and the .TB converter?

Used to debug connection issues with the debug adapter.

This tool is used for converting the output of the function profiler tool into a human-readable text file.

A command line version of the image config tool, it allows you to build an Windows CE OS image and choose which modules are included.

Not sure the difference between this and makeimg.exe

Just like standard Windows on the Desktop, windowsCE also includes a Registry to save keys and values.

This tool converts the human readable and easily editable ini file RegInit.ini into the compressed Default.fdf which is placed inside the WinCE OS image.

Command line utility to convert an executable into a binary file. Seems to take a language in as a parameter, not sure why.

This utility is simply a convenient tool to copy the newly built executable from the Build directory into the Release directory.

This file dumps NK-ROM image files to a binary file.

But what is a NK-ROM file?

Use this tool to upgrade the firmware of the Dreamcast development DEV.BOX.

Moves configuration files to multiple directories, not sure the purpose.

Seems to concatinate some binary files to StandardOut and strips out some data but not sure the purpose.

What is Natural Language Support Compression?

Since windows CE only supports Unicode strings, for PC ports ASCII would need to be converted to Unicode which is where this utility comes in useful.

The DebugMem tool is actually a library and programming interface that developers use to debug memory issues such as memory leaks.

Games that were built for WindowsCE

You can find out if your favourite game was built using the Windows CE SDK by inserting the disc and looking for the file 0WINCEOS.BIN in the root of the GD-ROM. Here is A list of Windows CE games that I have found so far:

SegaRetro wiki has a list of even more games that were created with the WindowsCE SDK but I have been unable to verify if they have WINCE on the disc yet, you can find the list here: Windows CE - Sega Retro.

Also I haven’t checked Demo discs or prototype games either, so please contribute if you know of some that should be added to the list.

The US version of Armada contains the linker map file for the WSEGACD windows CE library. This contains all the function names provided by the library.

The Next Tetris (WindowsCE)

The online edition of ‘The Next Tetris’ was built using the Dreamcast Windows CE SDK and has accidentally placed 2 windowsCE libraries on the retail disc:

Note that The Next Tetris is the only dreamcast game that includes these two libraries.

The game includes TETRISDC.EXE which is a SH-4 PE executable but it does not contain any debug symbols.

The french game Taxi 2 contained the PDB files for all the libraries provided by the WindowsCE runtime environment for dreamcast. Also of note is that the NTSC release of Armada also contained the PDB files for the same libraries but they have different md5 hashes so likely from different versions of the Windows CE runtime environment.

It was very rare for games to include library files on the disc, these would serve no purpose as the game can’t load static libraries at runtime (they would have to be dynamic link libraries .dll).

These are somewhat interesting as they do contain function names but they are just a small part of each game.

The Windows CE Platform SDK itself was available free from the Microsoft website and was used for programming for a range of embedded devices. However this only included the CE libraries and headers, in order to actually compile for the Dreamcast you would need to pay for the full Katana development platform 5.

These are the libraries that were unique to the Dreamcast Windows CE SDK and were not standard as part of the normal Win CE SDK.

Maple is the name of the library that allows the Windows CE SDK to connect to external devices such as Light-Guns, keyboards and more.

The VMIMIME library is used to connect between the main game code and the VMU unit in the back of the controller.