This post covers the hardware used to develop Playstation 2 games by major studios back in the day, for the software side see the post on the Official PS2 SDK.

For the software side of the PS2 Development Kit check out this post.

The official development kit created by Sony was by far the most widley used by game studios for development, however Sony sold a few different devices tailored for different purposes such as programming or QA. 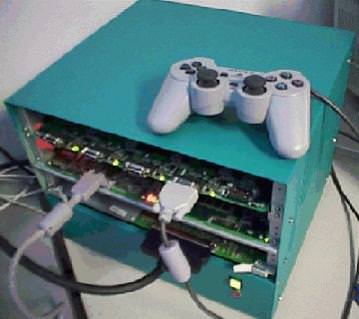 Before the retail release of the Playstation 2 hardware developers needed to start development so that the console would have titles on launch.

Since the hardware was still under heavy development, only a select few studios were trusted enough to get sent one of the Prototype PS2 development kits.

The development kits were used as a build target and connected to the development PC via a PCI interface card so the PC would send down the code to execute and the kit would run it and display the output on a separate screen.

The image on the left is the only known image of the prototype development kits and it was taken from a Sony Dev conference presentation 1.

These kits have an internal reference code EB-* with EB-1000 being the first unit developed and EB-2000S being the last known unit made available.

The PlayStation 2 DTL-T10000 Development Tool or TOOL for short was developed by Sony and sold directly to game studios for game development. It connects to a PC workstation and also has the ability to run both burned and retail PS2 game discs 2.

They have space to support 2 IDE hard drives at once, they came as standard with either 20gb or 40gb 3.

There were multiple models of the TOOL available, codes that have an H at the end had support for Networking built in:

The upgraded model DTL-15000 with the Performance Analyzer is especially rare and was a more expensive unit so developers tended to only have a couple and used them for debugging performance issues with their games.

Currently no video exists of the Performance Analyzer running, but if someone has the ability to record this it would be greatly appreciated!

Developed by SN Systems the DTL-T14000 hardware was not a full development kit in itself it was just an add-on for existing TOOL units that allowed developers to use a hard drive version of the game but it emulates the speed and disc access of a physical CD/DVD. This saves developers creating hundreds of CD/DVDs of their game when testing and gives more realistic load times compares to the hard drive 4.

Since the TOOL was an expensive beast aimed at programmers, for QA testing of games, Sony released another unit for known as the PLAYSTATION 2 DTL-H1000 DEBUGGING STATION or TEST for short. This was basically a standard Playstation 2 but with the ability to read burned CDRs.

There were a few different models of the TEST and different variants for each region:

Some early models didn’t have support for reading retail discs or DVDs, so only CDRs were supported 6.

To add networking capabilities you could purchase a DTL-H10010 Development tool PCMCIA card that slotted into the back of the TEST unit (there was a PCMCIA slot on the TEST where the retail had the Hard Drive bay).

For more information on the Debugging station, The Video Game project has an excellent page on the subject

Sony officially released an official development kit for hobbyists similar to their Net Yaroze system they created for the original Playstation.

The kit comes with:

They sold many of these to universities to tech console development, but we use the word console lightly as it was basically just Linux game programming as control of the PS2 hardware was severely limited 7.

Yabasic was released with every PAL Playstation 2 on the accompanying demo disc.

It was offered as an attempt to clarify the Playstation 2 as a Home Computer in the European Union to avoid the game console tax which existed at the time 8.

This attempt failed to convince the courts in Europe that the console should be classified as a Home Computer.