The Official programming development kit for the Gameboy consisted of the Debugger that cost 4,000 USD and the Emulator (ICE) which cost 3,000 USD and were both developed by the Nintendo owned company called Intelligent Systems 1.

They both connect to a developer workstation such as an IBM-PC via the SCSI port and offer a few software tools for communication between the IBM-PC and the Intelligent systems hardware. 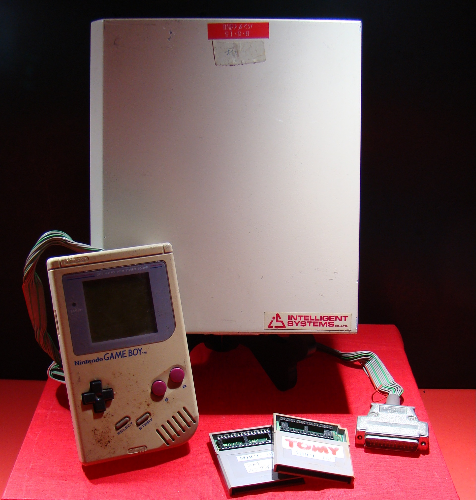 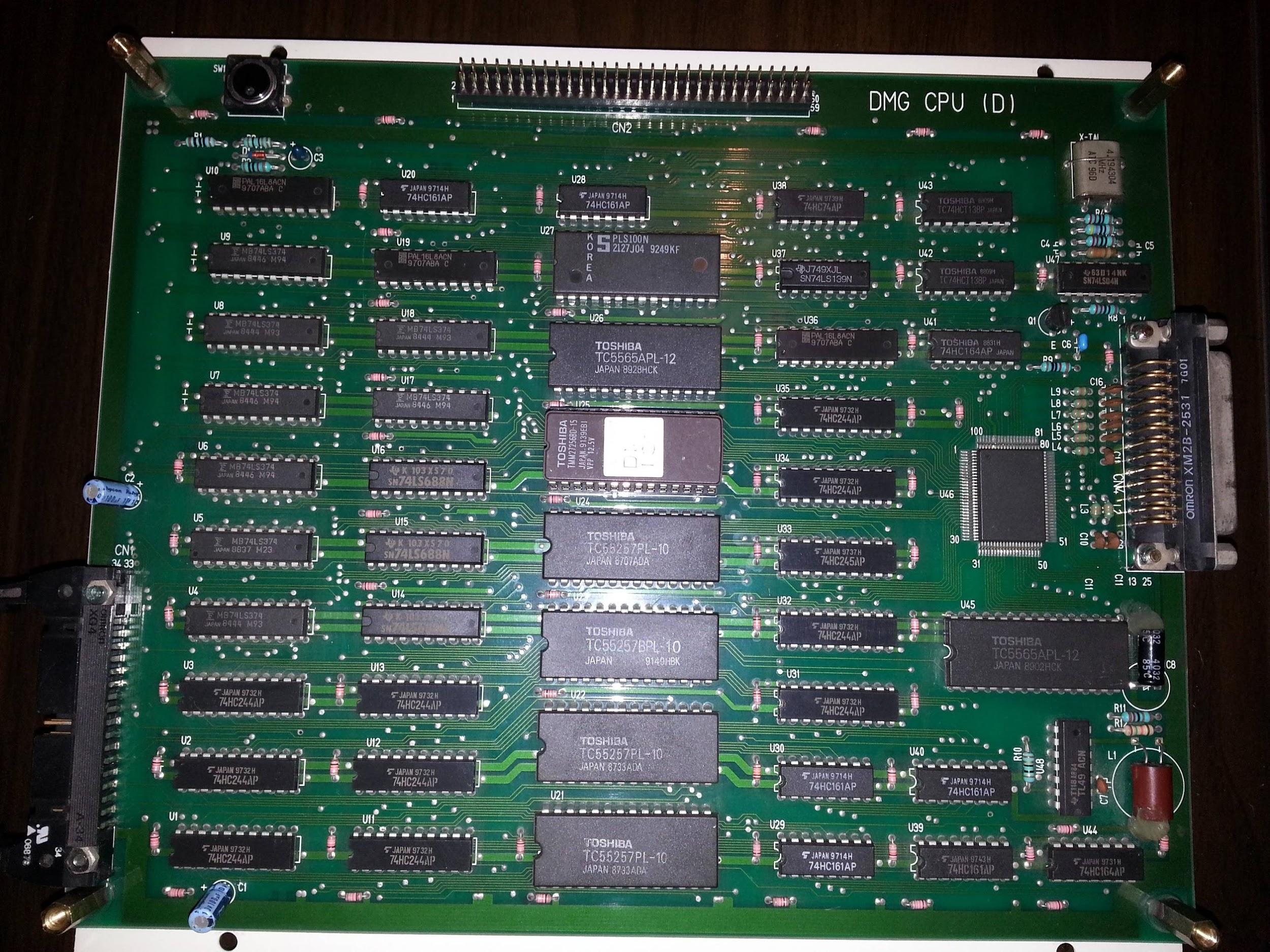 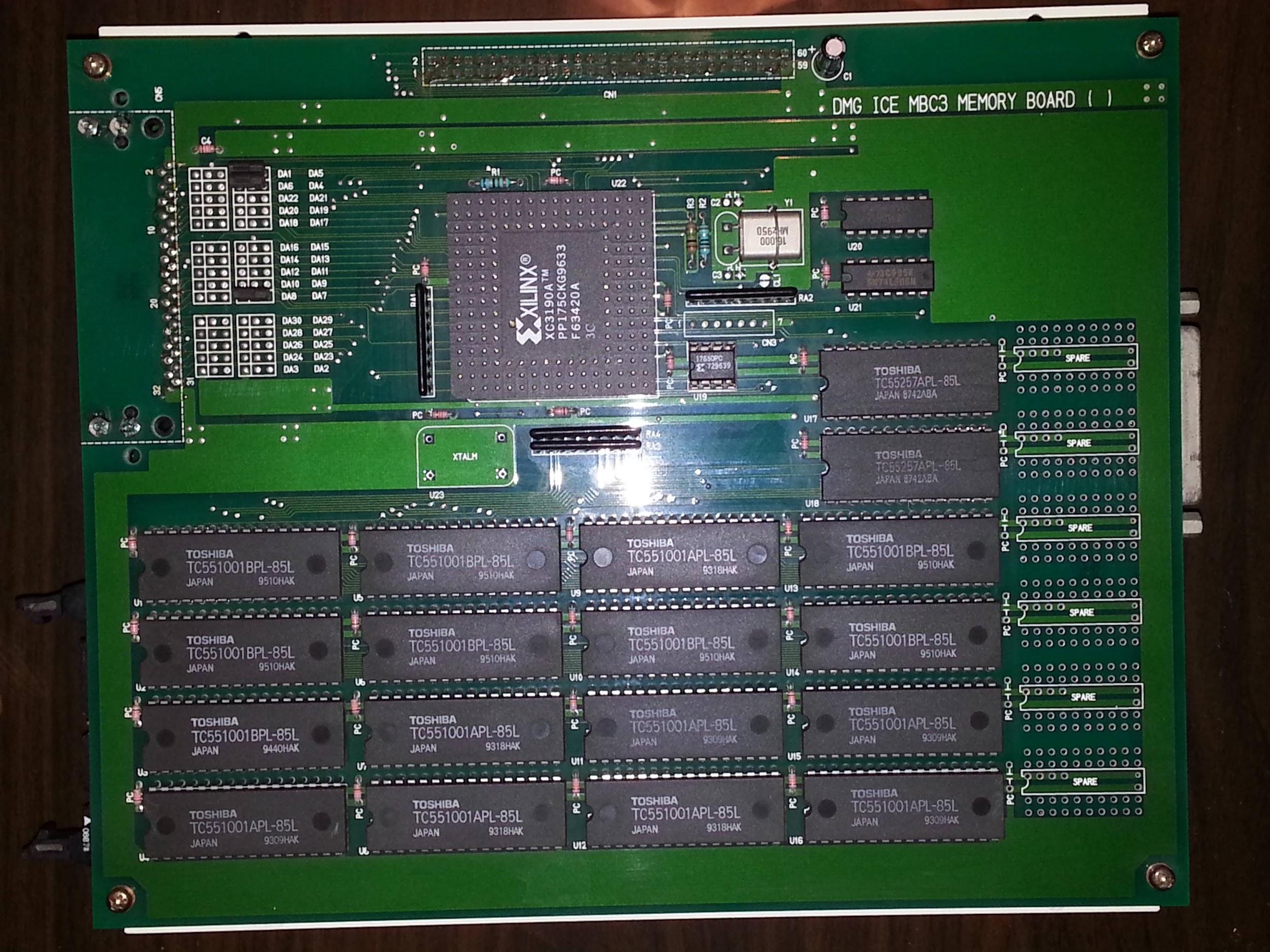 The Integrated Circuit Emulator or ICE was developed for the original Gameboy (DMG) and allowed developers to debug issues effecting their games, set breakpoints and inspect memory. This is also known as the Program development system (confirmation needed) but information on exactly how it was used is sparse. 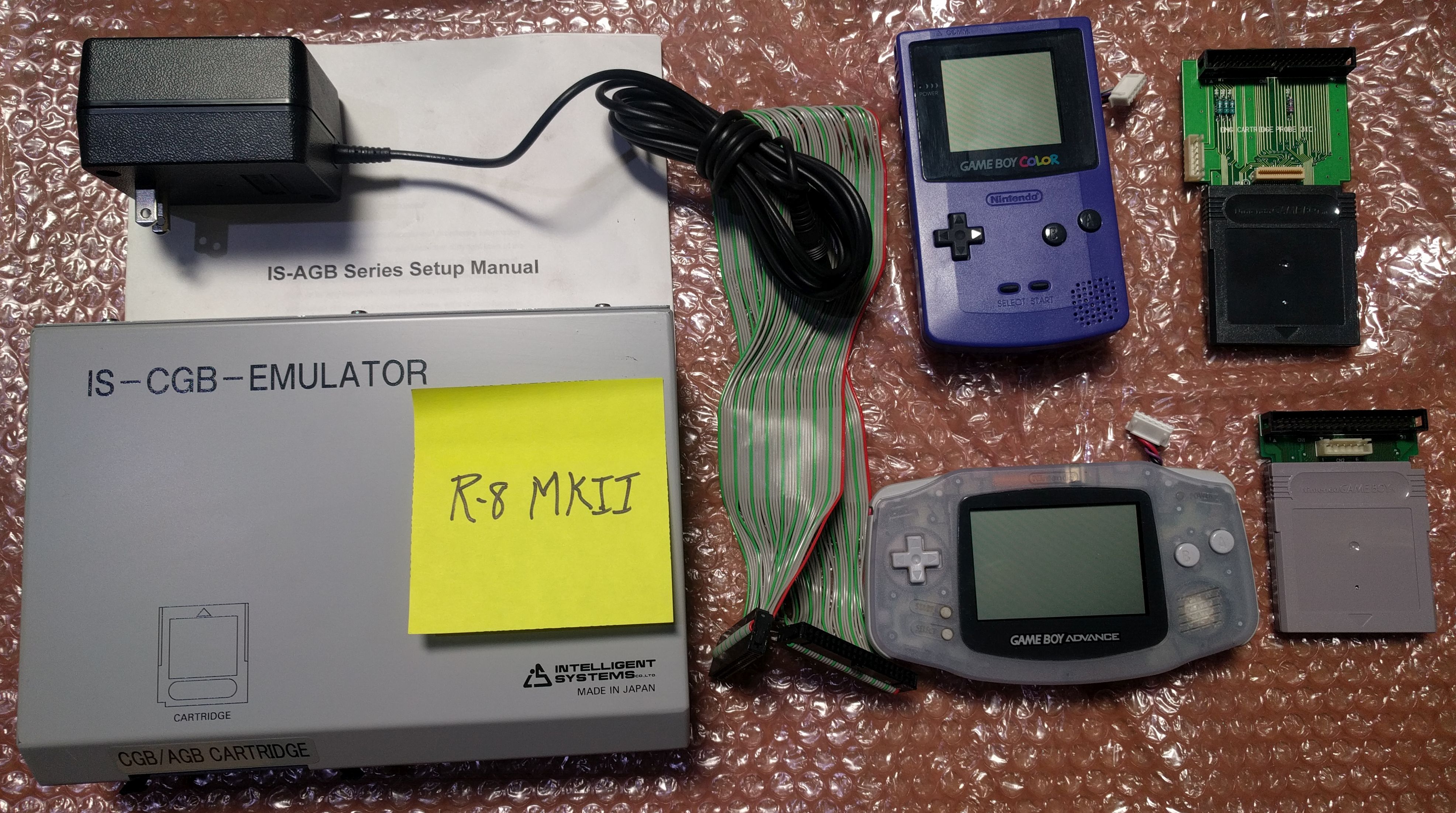 The IS-CGB-EMU (Intelligent Systems Color Game Boy Emulator) was hardware that allowed developers to download their games to try on the actual hardware and even communication between an IBM-PC and the gameboy hardware itself to execute and check operations. Developers that bought this would also be given discs with the Inteligent Systems Assembler/Linker and other software development tools.

If the IS-CGB-DEBUGGER label is ticked on the bottom of the unit then it also supported debugging options such as setting breakpoints, tracing, inspecting memory etc and is likely an ICE (Similar to DMG-ICE) 2.

The Later units also had support for the AGB (Advanced GameBoy or Gameboy Advance) built into the hardware.

I picked up a cool GBC dev kit. The IS-CGB-Emulator. I love the cartridge and cable that connects the handheld to the unit. Does anyone else have one of these or even the GBA version? Please post photos of your kit. I’d love to see it :) pic.twitter.com/NDhShaEToK 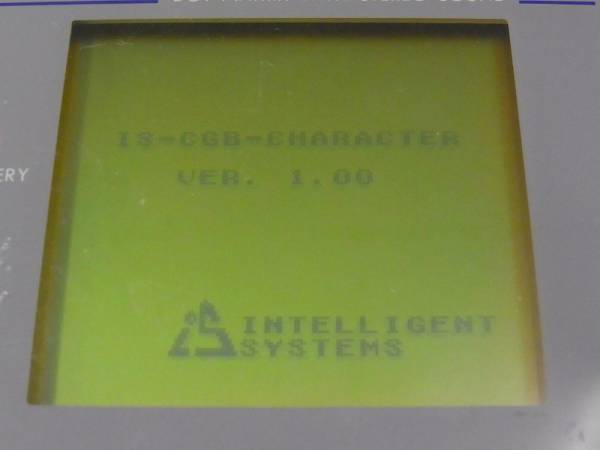 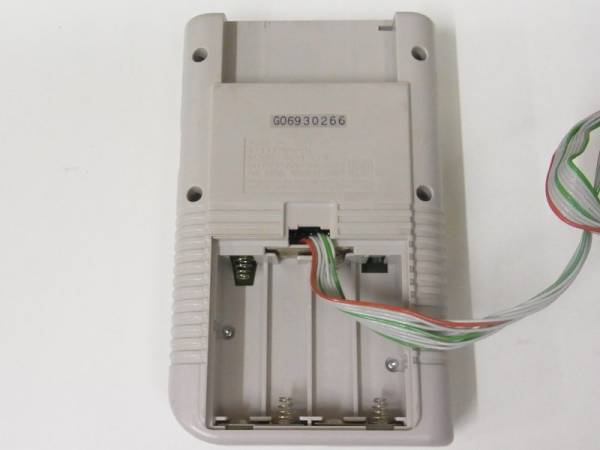 The DMG-CAD (Character Development System) allowed designers/artists to preview pixel art on the gameboy hardware without using the more programmer specific hardware such as the DMG-ICE.

Not much information is known about it other than a brief mention on the Intelligent systems website back in 1998 2.

There is also the IS-CGB-CHARACTER which is a similar system but updated for the Gameboy Color, the photos on the left are from that system but it only shows the Gameboy screen and wires coming out the back, it is unclear where the wires went.

There was one sold on Japanese Yahoo Auctions but the link was never archived in the wayback machine (“http://page.auctions.yahoo.co.jp/jp/auction/181784286”).

Demonstration tools are hardware that allowed publishers or the press to present gameboy games on a larger screen, useful for demos and to create screenshots for magazines. 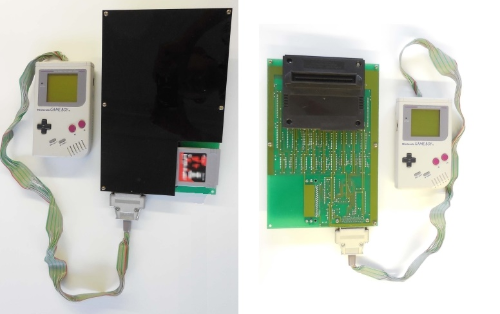 The WideBoy was used to present Game Boy games on a bigger screen such as a TV, to do this it contained Famicom (NES) hardware with a custom program written to an EPROM and connected directly to the Famicom board. It was developed by Intelligent Systems and only sold to Game developers and Press outlets by Nintendo themselves.

This was commonly used by developers and testers to make it much easier on their eyes than constantly looking at the non-backlit original Gameboy screens 3.

Chris M Covell has an excellent page on the WideBoy 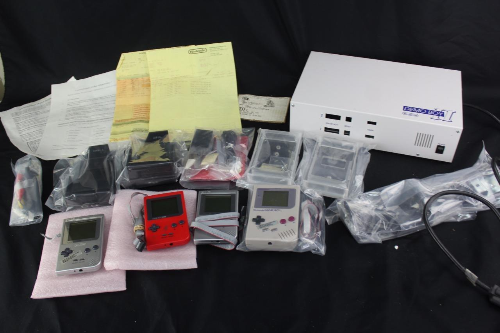 The Demo Boy was an alternative to the Wide Boy that allowed displaying two gameboy screens at once on a single TV. It used similar hardware that was based on the Famicom (NES) with a custom ROM image for loading the data from the two gameboys attached via cable and displaying the result on the screen. It is an ideal way to develop and test link-cable games on a much larger display.

There exists multiple versions of this under a variety of names starting with the Demo Boy then Demo Boy 2 and finally the Demo Vision 5.

Gameboy Cartridge tools are used to write to writable cartridges known as flash carts or to check the cartridges for problems.

As Gameboy cartridges contained the game on a ROM chip which is read-only by its nature, in order to create prototype cartridges you can replace the ROM chip with an rewritable data chip such as EEPROM and you have a cartridge ideal for testing! Nintendo sold boards with EPROM sockets that could be used for exactly this purpose, it was a standard gameboy cartridge but with a slot where the EPROM chip could be easily removed for re-programming, there was also a piece of hardware called a GANG writer that could write to multiple of these cartridges at once.

It was also very common for developers to just create these themselves from retail games.

Nintendo sold special flash cartridges which had rumble support along with Memory Bank Controller 5 (MBC5) which were used for games such as Looney Tunes Collector: Martian Alert.

Thank you to both @forestillusion and @Altomare3 for these excellent images of both the outide and inside of the cartridges. 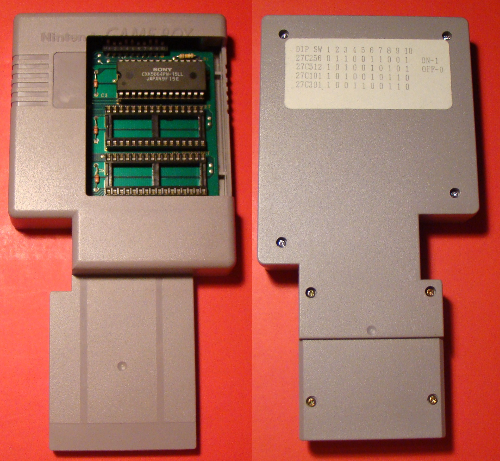 The DMG-MBC1 Multichecker cartridge was the earliest of the official prototype cartridges sold by Nintendo and only supported Memory Bank Controller version 1 (MBC1) so it was limited to games that were under 2 MB of ROM and 32 KB of RAM, Dig Dug is one game that was developed using this cartridge 6.

Rather the writing to the prototype cartridges one-by-one, which would be too time consuming as developers tended to send out multiple copies to the press (magazines etc) there was a tool known as the FLASH GANG WRITER where you could place the cartridges in and write the same ROM image to all of them. 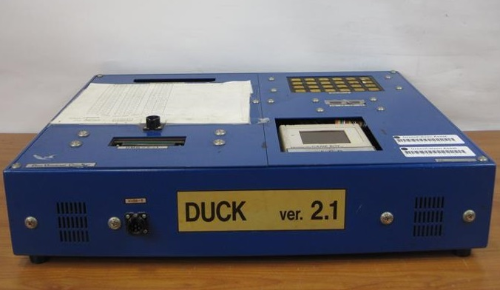 The DMG Universal Checker or aptly named DUCK is a unit for quality control (QA) of the cartridges during the manufacturing process, a Game Boy cartridge is inserted into the socket and the machine calculates and compares the checksum of the ROM with a test cartridge, it also tests saving and loading from SRAM to check for any corruption errors 7.

The GB Smart Development kit could be used by small studios or even individual developers to create games for the original Game Boy. However it was likely mainly used for piracy when sold to individual people and the development kit name was used very lightly.

The development cartridge was known as the Smart Card which was 16 Mbit in size and not only contained standard chips such as Save Ram (SRAM) but also had the Rumble feature used in a small amount of games such as Pokemon Pinball 8.

The files that were distributed with the development kit have been kindly uploaded by JakobAir here: GitHub - JakobAir/GB-Smart-Development-Kit: Files for the Gameboy Smart Development Kit will be placed here. I claim no authorization of these files.

The manual has never been scanned so if you find one then please help the community and share a pdf if you have the ability!

Ex-Codemasters employee DrTune posted his custom FPGA based Game Boy devkit used in 1992 to his twitter:

The Doctor GB Xchanger was primarily sold as a piracy device but could be used by consumers or even some small studios as a cheaper alternative to the official development kit.

The wiki **videogamedevelopmentdevices.fandom.com** has an excellent page on the Doctor GB Xchanger