Shaun Hollingworth and Matt Furniss are credited with creation of the kits hardware and software components. Presumably Shaun was in charge of the hardware (as his name is credited on the board itself) and Matt the software BIOS.

It seems to be very similar to Spidersofts own in-house dev kit (called ESYS) and it seems they worked quite closely on it. They also shared development software between the two software houses such as the Krisalis Assembler (KASM). 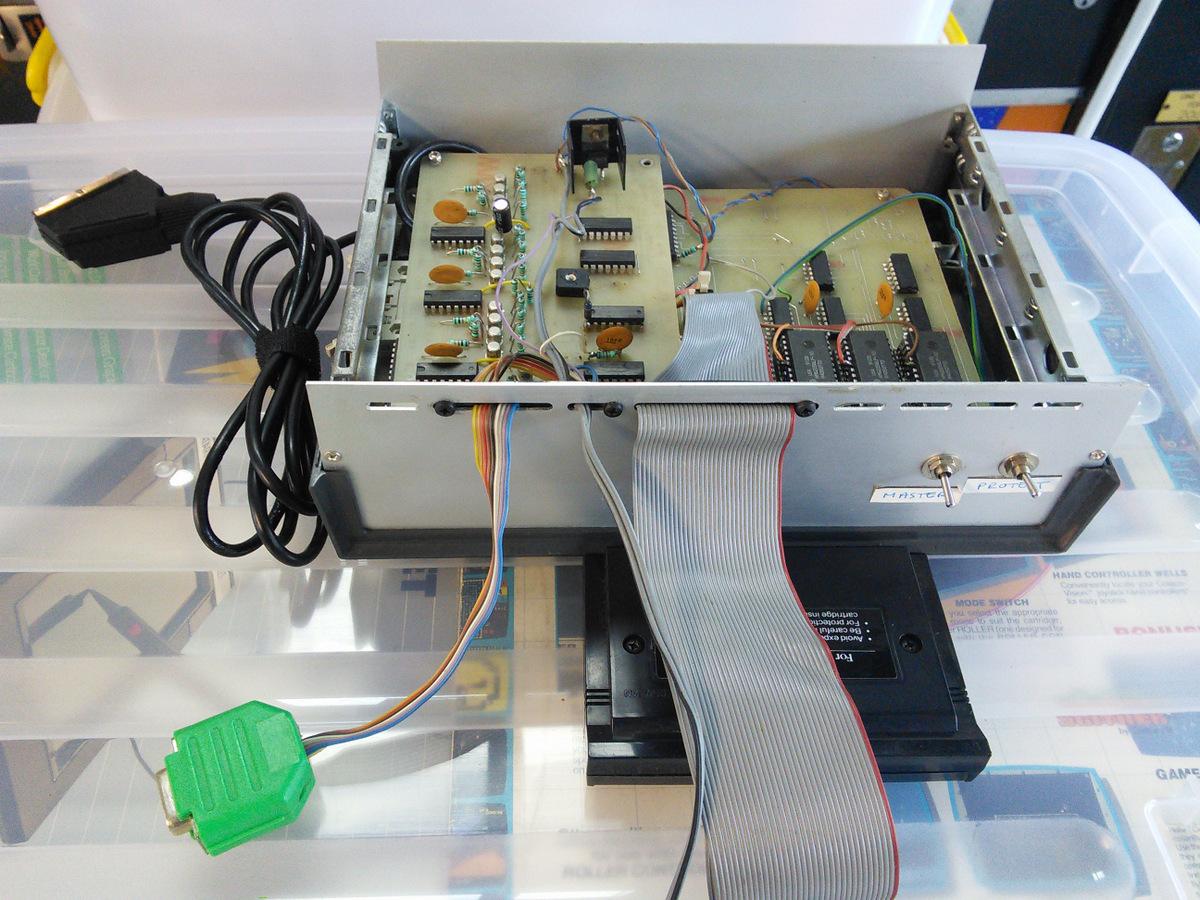 The Gear Video decoder was a board created by Shaun Hollingworth, which presumably is the board that connects the Game Gear to the TV monitor or development system. 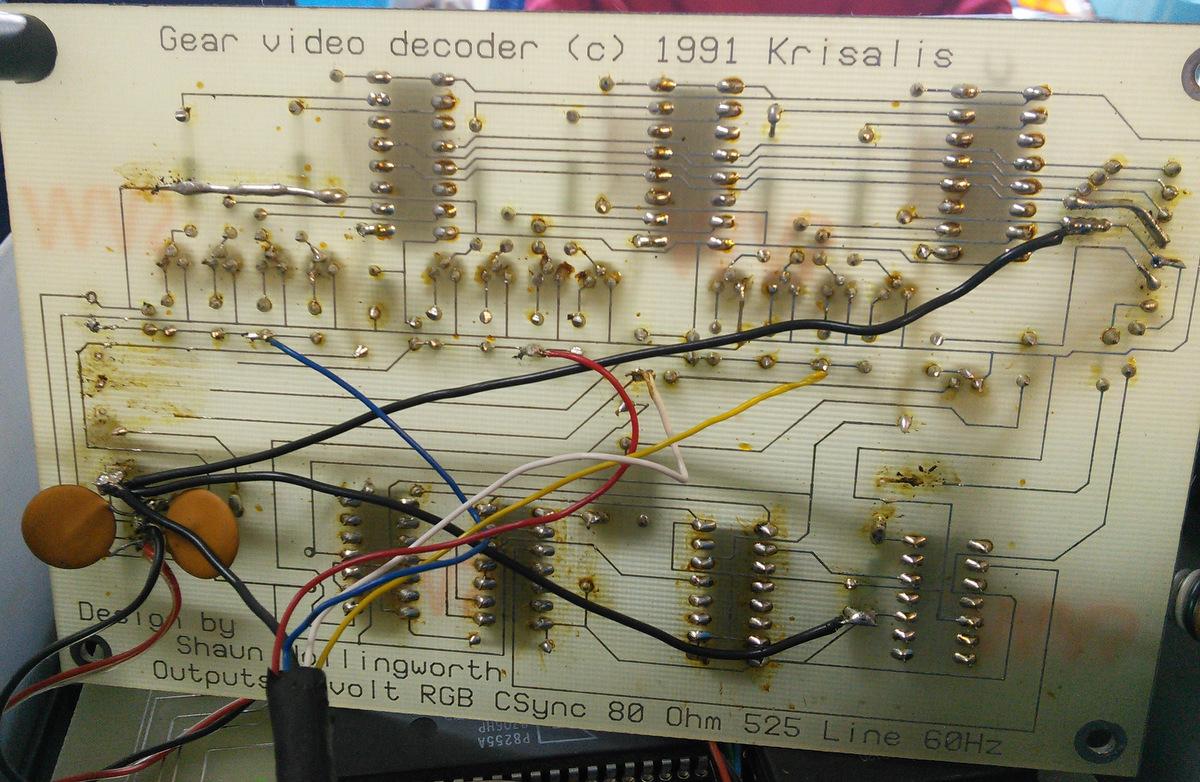 Games World magazine even featured a version of this hardware (which they called ESYS-RGB) in the first issue dated July 1994, which was sold to other games studios or press outlets rather than to the general public. Presumably this is the hardware they used to provide screenshots for the Game Gear games published in the magazine. 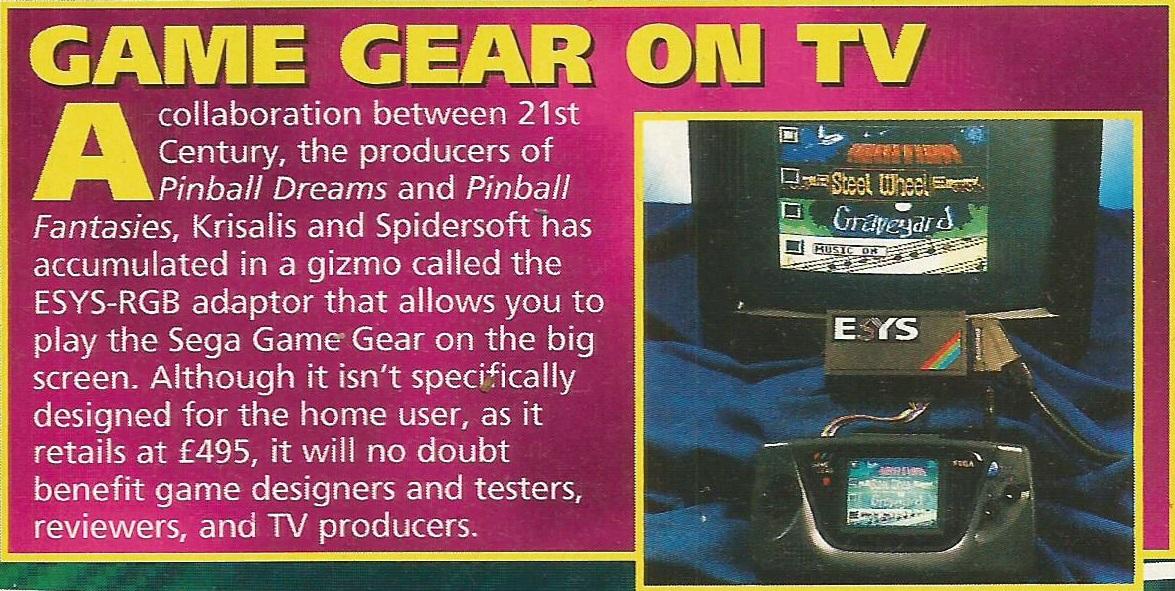 It seems both Krisalis and Spidersoft were creating their own development hardware in collaboration with one another, presumably sharing experience of what works and what doesn’t work so the other studio can improve their own development kit. They were both mentioned in the Games World article as creator of the ESYS-RGB adapter.

RetroSpark on SMSPower.org has the following to say on the comparison:

This development system shares many similarities with Spidersoft’s ESYS (described by Matt Taylor), including apparent support for easily swapping the ribbon cable and cartridge for use on a different system.

In fact, we discussed the possibility that this box is ESYS. Matt mentioned that Krisalis wrote the software for ESYS - perhaps they were also subcontracted to build the hardware. However, there is at least one difference between this box and Matt’s - this box does not appear to have a battery backup for the SRAM.

The BIOS for this development kit has been dumped by the talented people over at SMSPower.org and it runs out that you can run it in an emulator as either a Master System ROM OR a Game Gear ROM! The Bootup screen shows a different image depending on if its being run as a Master System game or Game Gear as can be seen in the screenshots below. 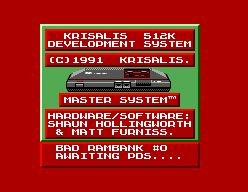 Initially Krisalis used PDS but then later moved to their own handwritten development toolchain.

It seems to be waiting for the PDS running the on programmers PC to send the code through the hardware interface into the development kit.

Shaun Hollingworth on this development kit:

The version you have was originally designed to support the PDS Z80 dev system, but increasingly people ran out of symbol space when developing, so I hastily ported our in house z80 assembler (also written by yours truly) which ran on Atari STs to the PC (completely rewritten in 8086 16 bit code) which solved that problem. KasmZ80 also had a z80 debugger with breakpoints using some z80 RST xx instruction, though I can’t remember which one.

We used it for all z80 dev work at Krisalis. We had versions for other CPUs including ARM.

So they initially used the PDS Z80 software development kit but due to lack of symbol space (symbols are names of variables, functions etc) they needed to use their own assembler which Shawn ported from the Atari ST to the PC in 1992.

It was called the Krisalis Assembler Z80 (KasmZ80) and they later distributed versions to other software companies such as Spidersoft.

The development compilers and debugging software, called KASM, was written by Krisalis Software and allowed for real-time debugging and breakpointing of code running on any device attached to the ESYS box.

The code was written using a single codebase for both MS/GG versions as well as the Game Boy version, and was developed in around 8 months.

Thanks to MattTaylor on SMSPower.org2 we have an example source file which would be parsed by the KASM assembler and produced a ROM for Game Gear and Master System!