This post covers the hardware used to develop Playstation One games by major studios back in the day, for the software side see the post on the PsyQ Software Development Kit.

For the software side of the PS1 development kit (PsyQ) check out this post.

Unlike previous games consoles, Sony decided to use a system that plugs in to a standard PC instead of rolling their own development hardware. This allowed developers to use their PC development experience and tools straight to work when developing playstation games.

EDGE magazine issue 20 had the following to say about this decision:

Perhaps the most ingenious move on Sony’s part was its decision to use the PC as a development platform, enabling it to call on the skills of huge number of developers. Licensees now receive a pair of full-length ISA cards that plug into a normal PC. These two cards contain the entire PlayStation chipset, as well as extra RAM and some logic to enable them to talk to the PC. ‘lt’s great having the system inside the PC,’ reckons Peter Molyneux. ‘With most bulky console development systems it sometimes feels like you’re surrounded by NASA control.’

Such technology doesn’t come cheap, though. PlayStation developers need to cough up £ 12,000 for the full system (which Sony is adamant it doesn’t make money on), although all subsequent software tools and hardware upgrades are free.

But the decision to embrace the PC as a development platform has wider ramifications. Rather than promote a PlayStation-only development path, Sony has seen the advantage of capitalising on the crossover of product between the two platforms. The vast majority of non-Japanese developers are focusing on both formats (in Japan the IBM-compatible PC has a small following).

The PlayStation hardware was condensed by SCE Japan onto two cards that would fit inside a standard PC. The Japanese flew Andy and Martin (From SN Systems) out to Tokyo in June to let them work on the new setup and write new software, so that the bulk of the existing system worked with the new hardware. Apart from extra RAM (eight megabytes of DRAM as opposed to two megabytes in the production PlayStation) and some PC logic, the hardware that slotted into the PC was virtually the same as the production PlayStation. 1

Original Prototype PS1 given to only a few developers such as SN Systems and was called MW.3, it was only used for very early playstation games. This was basically just an entitre prototype playstation and the hardware differes from the finally released retail playstation, a photo of it was provideded in EDGE issue 20:

Notice that it looks very similar to the Sony Network Engineering Workstation (NEWS) which was a line of Unix workstation computers that Sony developed in the late 80s and early 90s. It is likely the same machine but with added hardware for Playstation graphics and sound capabilities, more information on the Sony NEWS is available on Wikipedia: Sony NEWS - Wikipedia 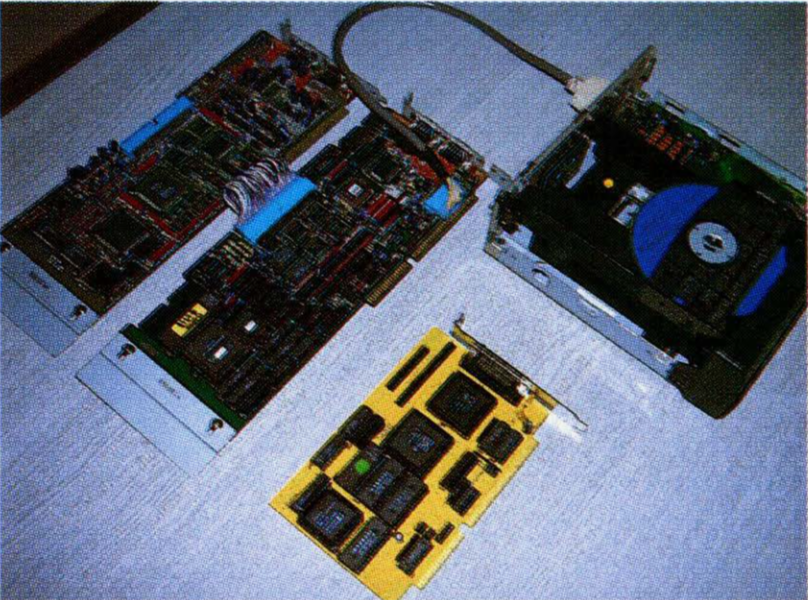 The video above shows the DTL-H2000 Development unit which slots into the ISA slot of a PC and contains all the hardware on a retail PS1. These boards were originally sold only to licensed developers only.

The CD emulator card developed by SN Systems (yellow card in above screenshot) is mentioned briefly in the same EDGE UK magazine article:

This enabled the company to design a CD emulator card which connected to a hard drive and output a steady data stream equivalent to that from the CD drive. Now PlayStation code could be written and tested under simulation without having to repeatedly cut expensive gold COs (requiring a specialist Sony machine costing £4000). 1

The Blue debugging playstation is described in the EDGE UK magazine issue 20:

However, the few differences between the development kit and a production Playstation mean that final testing is done on a blue debugging PlayStation - this is the closest it gets to running on a production console before the complete game is submitted to Sony for duplication.
1

There was also development hardware specifically tailored towards Sound engineers so that they didn’t require a full PS1 development kit to test their audio on Playstation hardware.

Due to the quality and relatively low-cost of the official PS1 development kit, it was rare for developers to create their own custom development kits, however a few do exist.

Radical Entertainment had its own customised PS1 console which has its left side cut out and an additional board was added that protruded out that side. This board has additional RAM chips and a port to communicate with the devleopers PC. Presumably the developer would load the full debug executables on to the extra RAM allowing a much more efficient debugging process and would have cost less than the official development kits to produce.

According to Cary Brisebois on Twitter there was software called Bonk that we used for communicating with the development unit [^5].

These photos are kindly contributed by Andrew Earley who recently obtained the development kit from a contact at a recycling center 3.