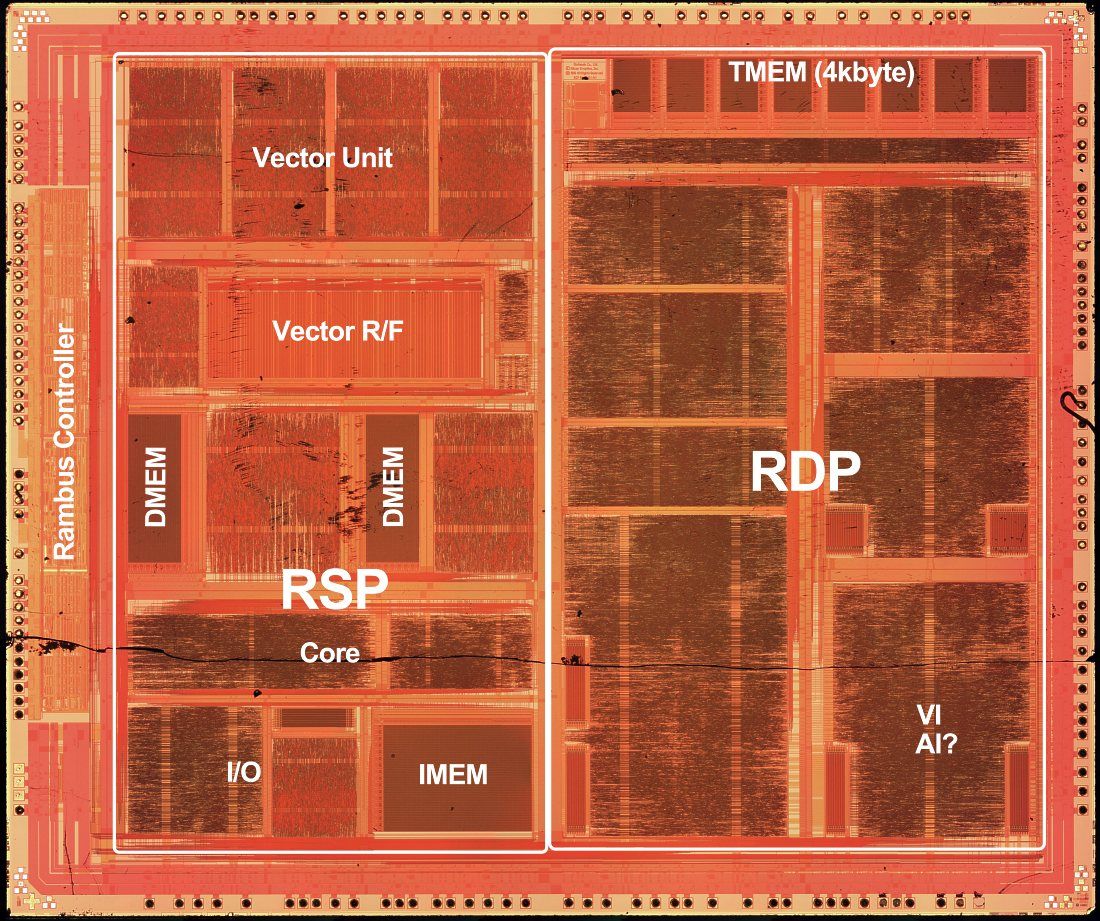 The N64 Reality Display Processor (RDP) is used to render the Nintendo 64’s game polygons into 2D pixels that it stores in the FrameBuffer ready to be displayed on the screen 1.

The functionality of the RDP was first described in an interview with George Zachary in the magazine Next Generation where he described the processor as the big advantage over the Playstation hardware as it allowed advanced features such as Texture Perspective correction which Sony’s hardware could not perform efficiently 2.

The RDP is used after the Reality Signal Processor has processed its calculations, so you can think of the RSP as a sort of Vertex Shader and the RDP as a sort of Pixel Shader 3.

For more information about the second half of the RCP known as the Reality Signal Processor check out this post.

Purpose of the RDP

The main purpose of the Reality Display Processor was to rasterise polygons into pixels that can be displayed on the screen. But it can also be used for a variety of effects:

One of the main advantages the N64 had over its competitors was its hardware accelerated Anti-Aliasing. Anti-Aliasing is a technique that makes the graphics look a lot smoother by removing the “jaggies” which are caused by pixels drawing a line in low resolution.

While this was a great feature when the N64 was released, people wanting to play N64 on more modern hardware started to hate the blurring effect of Anti-Aliasing. So there have been a number of ways to remove the Anti-Aliasing such as game modifications, game shark cheat codes and hardware modifications.

Z-buffering is vital for 3D game engines for perspective, without it 3d models would just be displayed on the screen in the order you draw them. No matter where they are supposed to be in the 3D scene.

This was all handled by the N64’s Reality Display Processor as it handles it on a per-pixel basis. You can even visualise the z-buffer as a black and white image of pixels that have already been written.

Components of the RDP

The RDP is built up of a number of sub-components such as memory for Texture data (TMEM), Lookup tables for textures (TLUT) and display lists that hold the result of the RSP’s calculations on the vertices.

TLUT stands for Texture Look up table and is stored in TMEM (Texture Memory). The first 2kb of the 4kb TMEM will be the texture look up table if it is used.

The Texture Memory (TMEM) located in the RDP can store up to 8 textures (tiles) at one time.

Although whether these are really programs is debatable, you can change the functionality similar to the openGL concept of glTexEnv but at its core its a fixed-function pipeline.

Display Lists might be similar to a binarized OpenGL display list format for models but this is unconfirmed 3.

One of the biggest problems with N64 emulation to date is that the RDP is not emulated at a low level.

Instead High Level Emulation or HLE is used, which involves approximating the functionality required instead of accurately emulating the behaviour of the physical chip.

There are many benefits to the High level approach, specially the faster speed, but it will never be as accurate as proper low-level emulation.

By High Level emulation we mean that the emulator checks which uCode is used for a specific game and instead of running the uCode with a CPU-like emulator it just runs various graphics commands directly.

Low level emulation would be emulating each opcode in the uCode 1.

One of the developers of the N64 emulation plugin GLideN64 known as gonetz has written an excellent series of posts about the difficulties: implementing Low Level Emulation of the N64s RDP.