Step by step guide for how to create a Reversing emulator for your console of choice.

Note that you may not need this guide if someone has already created a Reversing emulator for your console.

Fork an emulator for your console

Since the libRetroReversing library is based on libRetro it is easier to find an existing libRetro based emulator and fork it as the basis of your new project.

You can find the emulators here: libretro Emulator Repositories

Find the repository most suited for your project, as there can be multiple emulators for your target console, do some research to find out which one you personally prefer.

In this example we chose the Sega Saturn emulator from libretro and clicked fork, resulting in our own forked version of the repository here: https://github.com/RetroReversing/yabause

Add LibRetroReversing as a submodule

First checkout your newly forked repository to your local machine and then open a new terminal in the root of the repository.

This should run and when finished you will see a new folder called libRetroReversing in that root directory.

Now to make sure it is correct lets run git status like so:

Run the following in the same terminal you have been using previously:

Push the changes to github

That should create your first commit and now to make sure you don’t loose your precious work lets push back to github:

This is where it will get a little bit different depending on the emulator (libretro core) you are trying to build.

If you can’t find it but you have a file called CMakeLists.txt then you have an extra step before going to step 2.2.

2.1a Generate the Makefile with CMake

This step is only required if you don’t have a Makefile already generated.

You need to go to the directory of your CMakeLists.txt file in your terminal and run the following command:

After this has succeeded then you should get a “Makefile” file generated. If you don’t then please ask in the comments below and we should be able to help.

Before making changes to the Makefile its important that we can successfully run it.

So now that you are in the folder with the Makefile you simply need to run:

The problem with some of the libretro cores is that they sometimes reference system files that you don’t have, so when running make you may encounter issues such as:

Depending on your system you may have to install SDL2 from a package manager, e.g on Macos:

In my case I already had it installed but it still wasn’t finding it so I got the path to the file using the locate command like so:

It came up with a few paths including the one I want to use /usr/local/Cellar/sdl2/2.0.9_1/include/SDL2/SDL.h.

So I added the following to my environment:

Now that you have successfully compiled the library into a binary (with an extension such as .dylib, .dll or .so), you are ready to run it!

You can run the library you built through the terminal like so:

Note that for consoles that require a BIOS make sure it is located in the System directory of RetroArch. Mine was ~/Documents/RetroArch/system.

Step 4 - Modifying the Makefile to include libRetroReversing

4.1 Add include to Makefile

Find the main Makefile for your core, for example it may be called Makefile.libretro.

Find the line that imports the common makefile:

Add the following line after it, chaning ConsoleName to the name of the console (you will need this name later):

For example in the emulator SameBoy the Makefile for libretro is in its own libretro folder as you can see in the screenshot below: 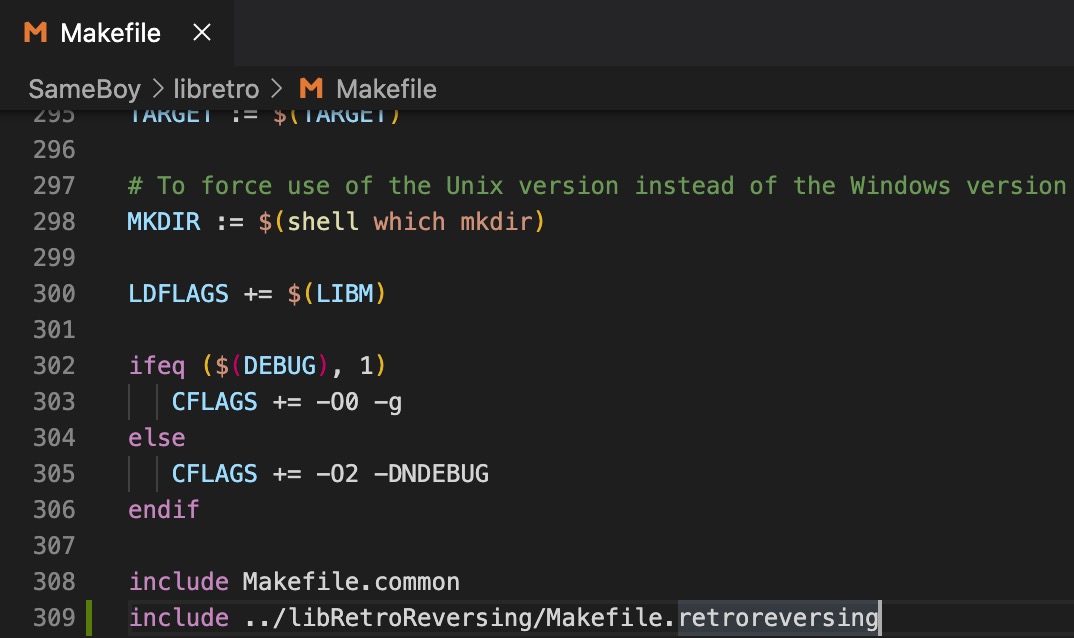 Now that you have included the libRetroReversing source files, re-run make the same way you did earlier and then make sure the emulator still works, you can do all this with the one liner below.

Add specific functions for your console

In the libRetroReversing submodule duplicate a file called ./console/DummyConsole.cpp and name it after your console e.g Saturn.cpp. This needs to match the ConsoleName exactly as you defined it earlier in step 4.1.

This file will be the main interface that will hold the custom code for your specific emulator.

There are a couple of functions you will need to implement:

5.1 Add Include to top of libretro.c

Find either libretro.c or libretro.cpp and add the following include to the top of the file:

Finding where to put this function call is tricky as it depends where input is handled in the core you are modifying, but try to find a function that uses retro_input_state_t and add the following call, which will modify the input based on if we are in playback mode or recording mode

And add the following code under it, note that whatever was in the second parameter slot (desc in thsi case) should be passed as the first parameter:

5.3 Allow libRR to pause the game

Find the retro_run function and add the following code to the top of it:

Find any calls to the function video_cb and replace them with calls to libRR_video_cb.

Find the definition of the retro_load_game function and add code like the following: